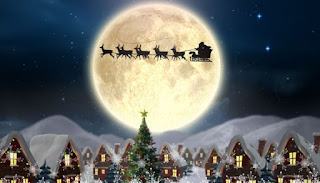 When the house is decorated with holly and ivy on Christmas Eve, good luck will bless the family in the New Year.

Also called "wayfarers' pies," these tasty treats were passed out to visitors during the Christmas season. To earn good luck in the twelve months of the upcoming year, visitors tried to eat twelve pies at twelve different houses during the twelve days of Christmas.

In ancient times, mistletoe represented peace and friendship. When friends stood beneath a tree adorned with mistletoe, their friendship would be blessed with good luck. Enemies who did likewise would call a truce for the day. The tradition of kissing under the mistletoe grew from these older legends.

These sugary treats represent the shepherd's crook at the nativity.

Since the 13th century, it has been the custom to offer a toast to each other for good health and cheer during the Christmas season. The original wassail bowl contained roasted apples, ale, sugar, spices, and cream or eggs. Eventually, egg nog developed as the traditional Christmas drink.

Yule logs were lit during the winter solstice to ward off demons and light up the darkest day of the year.

Fir trees traditionally represent life's victory over death, or eternal life. It was common during Saturnalia for Romans to decorate their homes with evergreen boughs.

Christmas 2015 will be graced with the first full moon since 1977. Another one will not appear until 2034. The full moon in December is often called the Full Cold Moon, Full Long Nights Moon, or the Moon before Yule. An old tradition relates that when a full moon rises on Christmas Eve, the animals will be blessed with the gift of speech.

HAPPY HOLIDAYS TO ONE AND ALL, AND A BLESSED NEW YEAR!