St. Thomas the Apostle and the Three Wise Men 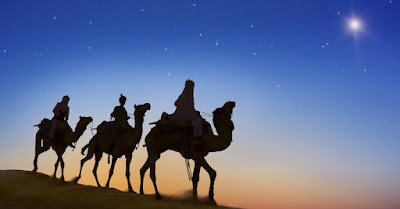 The Gospel of Matthew recounts how the Three Wise Men followed the Star of Bethlehem to the Christ Child in the manger, worshiped Him, and brought Him gifts. Then they left, feeling it wiser to bypass King Herod and his murderous intentions.

Now when Jesus was born in Bethlehem of Judea in the days of Herod the king, behold, wise men from the East came to Jerusalem, saying, "Where is he who has been born king of the Jews? For we have seen his star in the East, and have come to worship him." When Herod the king heard this, he was troubled, and all Jerusalem with him; and assembling all the chief priests and scribes of the people, he inquired of them where the Christ was to be born. They told him, "In Bethlehem of Judea; for so it is written by the prophet:

'And you, O Bethlehem, in the land of Judah, are by no means least among the rulers of Judah; for from you shall come a ruler who will govern my people Israel.'"

Then Herod summoned the wise men secretly and ascertained from them what time the star appeared; and he sent them to Bethlehem, saying, "Go and search diligently for the child, and when you have found him bring me word, that I too may come and worship him." When they heard the king they went their way; and lo, the star which they had seen in the East went before them, till it came to rest over the place where the child was. When they saw the star, they rejoiced exceedingly with great joy; and going into the house they saw the child with Mary his mother, and they fell down and worshiped him. Then, opening their treasures, they offered him gifts, gold and frankincense and myrrh. And being warned in a dream not to return to Herod, they departed to their own country by another way.

Later stories in the apocrypha elaborate on this account. The Three Wise Men meet St. Thomas the Apostle, who baptizes them as Christians, gives them the Eucharist, and sends them out into the world to spread the message of Christ as one of his disciples.

During the baptismal ceremony, St. Thomas recites this prayer:

"We praise you, O mystery of salvation,

which was given to us in oil by grace for anointing.

which was given to us in oil by grace for salvation,

which was given to us in oil for salvation and

And by it (you) enlighten us and drive away

darkness and error from us.

And again, by its mystery the athletes of the contest

Glory to you, O mystery of the oil,

since you became worthy to be in fellowship with

With you the victorious are crowned in the contest,

and you are twinned with the Spirit.

And you fly over the water like your (twin,)

you mix the soul with mind,

and you renew the body with the birth of salvation.

Come, O partner of the firstborn;

Come, O renewer of humanity by the birth to eternal

and rest upon these believers, the beloved ones of our

Lord Jesus Christ, and purify them and sanctify them

from all the stains of their bodies,

and may they become for you temples for your

and rest for the Son of perfect mercy.

And may you perfectly sanctify them with the birth of

(Translated from the Syriac by Brent Landau)

May we all become wiser, closer to God, and better disciples of the Christ Child in the year ahead.

Posted by Dawn Pisturino at 5:49 AM No comments:

Christmas Dinner from the 1950s Housewife 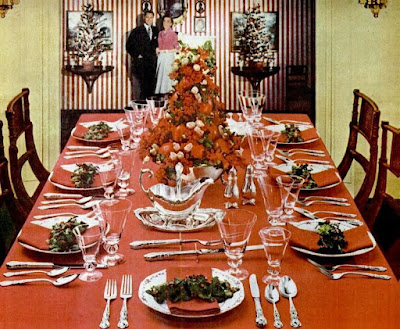 Note the formal table setting above. Elegant, polished, shining, and decorative. Polishing the silver was a long and tedious job, but so worthwhile! Beautiful!

Cocktail parties were popular in the 1950s, and the Christmas cocktail party was no exception.

Sweets such as petits fours, candies, cookies, and other small desserts.

Christmas is timeless, however it's celebrated.

Posted by Dawn Pisturino at 8:23 AM No comments: