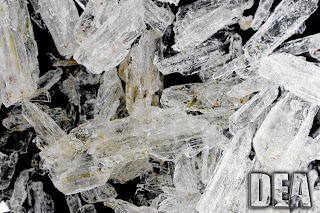 The National Institute on Drug Abuse reported in 2005 that 10.4 million Americans aged 12 years and older had tried methamphetamines at least once.
Meth is a synthetic amphetamine which was once used in nasal decongestants and bronchial inhalers. It is a Schedule II controlled substance which stimulates the central nervous system and damages the brain.
Popularly referred to as "crank," it is available as pills, capsules, powders, and crystal chunks called "ice." Users achieve an intense "high" by swallowing, inhaling, smoking, or injecting it. During the 8-24 hours that it remains in the body, users experience incredible alertness and euphoria, enhanced feelings of well-being, paranoia, hallucinations, insomnia, loss of appetite, anxiety, and a heightened sense of personal power. They may become irritable and violent.
Meth is highly addictive. After the "high" wears off, users become severely depressed and feel strong cravings.
The body responds to meth with elevated respiration and heart rates, blood pressure, and body temperature. The temperature may climb so high that brain damage and death may result.
Meth causes permanent damage to brain cells, nerve endings, and blood vessels in the brain. Users may develop Parkinson's-like symptoms, characterized by tremors and uncontrolled body movements.
Meth addicts are at higher risk for developing kidney and lung disease, permanent psychiatric disorders such as paranoid schizophrenia, a weaker immune system, severe tooth decay, skin problems, heart and liver damage, stroke, and complete cardiovascular collapse.
Using meth during pregnancy can lead to greater risk of premature birth and birth defects. In homes where parents use meth, child abuse and neglect seem to be more prevalent.
Neighborhoods with widespread meth abuse tend to have higher incidences of motor vehicle accidents, crime, fires, explosions, and hazardous waste exposure.
When you examine the big picture, meth is a problem that cannot be ignored. It destroys lives and has profound effects on the whole community. Please support local efforts to stem the use of this deadly substance.
Dawn Pisturino
April 24, 2007
Copyright 2007-2020 Dawn Pisturino. All Rights Reserved.
Posted by Dawn Pisturino at 12:44 PM