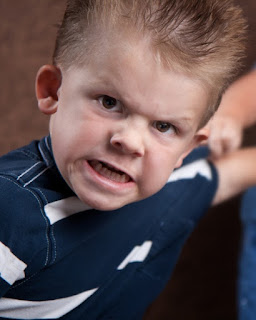 
Attachment disorders arise when children experience prolonged and persistent abuse and neglect.  They are unable to form attachments and respond to the world with anger, defiance, and aggression.  They resist authority figures and defy social rules.  Without early intervention, these children are at high risk for delinquency, criminality, and the commission of violent crimes.
Attachment Disorder and Crime


Criminologists recognize that antisocial behaviors, which are more common in males, can lead to an increase in criminality and violent crime (Siegel, 2012).  Much of their research has been based on John Bowlby’s attachment theory.


Psychoanalyst John Bowlby studied Lorenz’s research on imprinting.  He concluded that “children come into the world biologically pre-programmed to form attachments with others, because this will help them to survive” (McLeod, 2007).  Failure to make secure attachments can lead to “affectionless psychopathy” later in life (McLeod, 2007).


“Attachment is an enduring affective bond characterized by a tendency to seek and maintain proximity to a specific person, particularly when under stress” (Levy, 2000).  This bond is created between mother and child during the nine months of pregnancy and the first two years of life (Levy, 2000).  The mother-child bond is unique and forms through social releasers — behaviors that ensure a reciprocal response between mother and child (McLeod, 2007).  Smiling, eye contact, holding, rocking, touching, and feeding are cues which create a “mutual regulatory system” (Levy, 2000).


When the mother-child bond fails to develop, infants can suffer from severe colic and feeding difficulties, fail to gain weight and reach important developmental milestones, remain detached and unresponsive, refuse to be comforted, and respond too readily to strangers (Attachment Disorders, 2014).


Children need a “secure base” to learn trust and reciprocity, qualities which lay the foundation for all future relationships (Levy, 2000).  They must be able to explore their environment without fear and anxiety so they can attain full cognitive and social development (Levy, 2000).  A strong, secure attachment between mother (or other primary caregiver) and child helps the child to learn self-regulation (self-management of impulses and emotions) (Levy, 2000).  The child has the opportunity to form a strong self-identity, competence, and self-worth and to create balance between dependence on the mother and his own autonomy (Levy, 2000).  A secure base allows the child to learn empathy and compassion and to develop a conscience (Levy, 2000). A well-established core belief system helps the child to evaluate himself, his caregiver, and the world around him (Levy, 2000).  He learns resourcefulness and the resilience to cope with stress and adverse events (Levy, 2000).


Even adopted infants can “develop healthy attachment relationships” in the first year of life if raised in a safe and secure environment by a caregiver who is consistently responsive to their needs (Reebye, 2007).  Children with Down Syndrome tend to develop attachments later, during the 12-24 month period (Reebye, 2007).


Secure attachment allows children to develop positive patterns of cognition, behavior, and interaction which help them to survive successfully within the family and society at large (Levy, 2000).  They internalize altruism, empathy, compassion, kindness, and morality, qualities which lead to proper social behavior and social cohesion.  They learn to view themselves, the caregiver, life, and the world as essentially good, safe, and worthwhile.


Children who do not develop secure attachments experience just the opposite.  They learn to view themselves, the caregiver, life, and the world as hostile, dangerous, and worthless (Levy, 2000).  By age four, these children exhibit symptoms of chronic aggression — “rage, bullying, defiance, and controlling interactions with others” (Levy, 2000).  These are the children who overwhelm the child welfare and juvenile justice systems and carry diagnoses of conduct disorder, oppositional defiant disorder, and antisocial personality disorder.  Children with severe attachment disorder typically engage in cruelty to animals, bed-wetting, fire-setting, pathological lying, and self-gratification at the expense of others.  They are predatory and vindictive, controlling and manipulative.  They lack empathy, remorse, and a moral conscience.  They are unable to form close relationships with others because they never experienced it themselves.


Adults with these traits are often labeled psychopaths and may become serial killers and mass murderers (Levy, 2000).  The motivations for their crimes are manipulation, dominance, and control.  They feel powerless and inferior, committing horrific crimes against others as a way to release their frustrations and hostilities (Levy, 2000).


But why do some children fail to develop a secure attachment to their mother or other primary caregiver?  Researchers have determined several common factors — “abuse and neglect, single-parent homes, stressed caregivers, parents with criminal records” (Levy, 2000).  Other factors include parental mental illness, substance abuse, and a history of maltreatment.


Within the family, persistent conflict and violence lead to childhood anxiety, fear, and insecurity.  Children learn that violence is an acceptable way of dealing with life (Levy, 2000).


Poverty, living in an unstable community rife with violence, access to weapons, and graphic depictions of violence on TV and in the movies desensitizes children.  They learn to “express feelings, solve problems, boost self-image, and attain power” through aggression and violence (Levy, 2000).
Prenatal drug and alcohol abuse, maternal stress,  birth complications, prematurity, nutritional deprivation, and genetics can lead to inherited personality traits and brain damage that interfere with learning, attention spans, and impulse control.  Compound this with a firmly-established attachment disorder, and a child is likely to be difficult to control, impulsive, hyperactive, defiant, aggressive, indifferent to learning, and angry (Levy, 2000).


Teenagers still need a “secure base” as they wrestle with independence versus security (Mathew, 1995).  If a teenager has developed a secure attachment to his mother or other primary caregiver, he will weather the storms of adolescence with more resilience and adaptive abilities to cope with stress and change.  A strong, loving family environment teaches teenagers social competence and self-confidence.


Adolescents who grow up in unstable, inconsistent homes torn apart by conflict and violence develop “psychopathology resulting from the inability to function competently in social situations” (Mathew, 1995).  “Delinquency, addiction, and depression” grow out of “inadequate problem-solving” (Mathew, 1995).  The teenager suffering from attachment disorder is incapable
of interpreting and responding to social cues in appropriate ways (Mathew, 1995).  They view the world as a hostile place, attribute hostile intentions to other people, and respond aggressively.


Decades of research have found clear links between early childhood abuse and neglect, attachment disorder, and delinquency and violence later in life.  It is not surprising, then, that children under age twelve have committed some of the cruelest crimes or that adolescent males are three times more likely to commit violent crimes than their female counterparts (Levy, 2000).


Traditional psychotherapeutic tools are ineffective on children suffering from attachment disorder because these children are unable to trust others and form the therapeutic bond
necessary to engage in treatment (Levy, 2000).  Without early intervention, however, these children are at high risk for risky behaviors, criminality, and incarceration.


Several treatment modalities have been developed to help children overcome their attachment difficulties.  Most focus on learning how to trust and feel secure.  One of the more controversial, Holding Nurturing Process (HNP), involves forcibly holding the child and maintaining eye contact, which is supposed to promote secure attachment and self-regulation (Chaffin, 2006).  HNP has been associated with the death of several children, however, and criminal charges have been filed against some attachment therapists and parents (Chaffin, 2006).


The most effective attachment therapies allow the child to gradually build up trust with a committed therapist who then works with the child to re-program patterns of negative thinking and behaving (Levy, 2000).  Therapy is based on the individual needs of the child and involves family, school, and community.  The child learns positive coping skills that help him to function successfully within the family and society.


Parents and other primary caregivers can undergo Corrective Attachment Therapy in order to enhance their parenting skills and learn specific tools for dealing with a difficult child (Levy, 2000).  Parent and child must go through therapy simultaneously so that they both learn mutual caring and respect; open up to feelings of affection; set up limits, rules, and boundaries; share empathy and compassion; and learn how to be in tune with one another (Levy, 2000).


If high risk families can be identified early in the process, families can be enrolled in special programs and children can receive the treatment they need to overcome the damage already done.
References