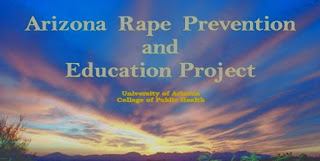 
Social services in Arizona are concentrated mainly in the Phoenix area.  Outlying areas may or may not have sufficient services.  In Mohave County, for example, domestic and sexual violence services are geared largely toward families and domestic violence.  Few services exist specific to rape prevention.  In fact, the nearest actual rape center is located in Flagstaff (Coconino County), which is two hours away.  Arizona does have a comprehensive Sexual Violence Prevention & Education Program aimed at prevention of sexual and domestic violence, but most state-funded organizations are located in southern Arizona.  National organizations like RAINN provide general guidelines and state-by-state information.


The Sexual Violence Prevention & Education Program in Arizona originated at the state level, conforms to CDC guidelines, and depends on funding from the CDC and other sources.
In 2004, the Governor’s Office for Children, Youth, and Families formulated a state plan that would “increase capacity . . . to provide services, promote prevention, conduct trainings, and create public awareness activities statewide” in the area of sexual assault.  The primary goal was to “increase victim access to comprehensive crisis services” (Governor’s Office for Children, Youth, and Families, 2004).
A statewide eight year plan was implemented through the Arizona Department of Health Services in 2010 that would “stop first time perpetration” through standardized educational curriculum in the schools, colleges, and universities; faith-based organizations; widespread media campaigns; and businesses that serve alcohol.  The mission was to achieve “the vision of a culture that supports healthy, respectful relationships through primary prevention efforts and zero tolerance of sexual violence in Arizona communities” (Arizona Department of Health Services, 2010).
Sexual assault is a public health threat that requires preventative education and counseling before an assault occurs; interventions immediately after an incident; and long-term follow-up care, if necessary, with therapy and empowerment tools (University of Arizona, 2012).  Programs are now teaching bystander intervention skills to people who want to serve as role models and intervene when they witness a potential or actual sexual assault occurring.  The University of Arizona routinely screens students for past and recent sexual assaults and abuse so they can receive the therapy they need.  Male students learn how to evaluate their own attitudes and beliefs about male dominance and entitlement in order to gain new respect for their partners and develop more effective communication skills (University of Arizona, 2012).
The Sexual Violence Prevention & Education Program implemented in 2012 on the campus of the University of Arizona in Tucson is also available to other campuses, organizations, and businesses through their community outreach program.  According to their research, alcohol is implicated in 50-70% of all sexual assaults.  Drug and alcohol screenings are now done on campus to screen students for substance use problems.  Students receive information about consent and the ability/inability to consent for sexual activity while intoxicated.  Freshmen are required to take an online course in sexual assault (University of Arizona, 2012).
Research conducted at the University of Arizona supports new laws and public policies.  Researchers have found that community-based programs are most effective.  Their public awareness programs have been so effective, Governor Douglas Ducey proclaimed April 2016 Sexual Assault Awareness Month (Governor’s Office, 2016).
According to the National Center for Injury Prevention and Control (2016), 1 in 5 women and 1 in 15 men experience rape or attempted rape.  By the age of eighteen, 40% of women have suffered some sort of sexual abuse or assault.  The long-term physical and psychological trauma can be devastating.  Family Advocacy Centers have been established in some areas of Arizona to provide post-sexual assault services, including forensic evidence collection, expert witness testimony, and legal representation.  Arizona state law allows victims to receive a forensic examination by a trained examiner within 120 hours (5 days), whether or not they plan to report the incident to police (Governor’s Office for Children, Youth, and Families, 2004).  Forensic biological evidence will be kept indefinitely in unsolved felony sexual offense cases (Arizona Revised Statute 13-4221).  There are no statutes of limitations in felony sexual offense cases (Arizona Revised Statute 13-107).  The definition of rape has been expanded in order to increase the number of convictions.  Sexual assault is a class 2 felony, but if a date rape drug was used, the sentence will be increased by three years (Arizona Revised Statutes 13-1406).  The minimum sentence for a first conviction under ARS 13-1406 is 5.25 years, but a life sentence may be imposed if intentional serious physical harm was inflicted.
Cultural competence remains an important issue when dealing with victims of sexual assault since the United States has such a diverse population “with differing ideas about domestic violence and sexual assault” (Warrier, 2005).  Trained interpreters and bilingual educational materials must be available.  Professionals must be able to understand victims’ experiences of violence within the context of their own culture.  This is particularly crucial among the Native American population.
Kathryn Patricelli, MA (2005), educates women on what to do after an assault or rape.  First off, they should not bathe or cleanse themselves.  Secondly, they should call the police and report what happened. Third, women should go the emergency room and ask to be examined.  A forensic examination should be performed.  If a date rape drug was used, they should have a urine toxicology screen done.  Fourth, they should go stay in a safe place or have someone stay with them.  Fifth, victims should get help from a counselor to ease the shock, pain, and guilt.  If symptoms do not ease in a reasonable amount of time, the victim should get ongoing therapy for post-traumatic stress disorder.


The best online results were found in Arizona government websites and publications.  Kingman Aid to Abused People/Sarah’s House did not answer their door or telephone.  Their primary focus is on family abuse and domestic violence.  Calling the Mohave Victim Witness Program phone number connected me to a pager.  There was no local rape prevention literature available at the Mohave County Library in Kingman; their resource list was out-of-date; and the librarian could only find two young adult books in the system related to teen dating safety and sexual harassment.


Local programs funded by the state of Arizona must provide “education on sexual harassment, definitions of rape, teen dating violence, assertive communication, and strategies to increase reporting and awareness of sexual violence” (Arizona Department of Health Services, 2016).  Some organizations also explain consent and Arizona law.
Most programs and organizations in Mohave County provide post-incident crisis intervention, shelter, and hotlines for victims of domestic violence and sexual assault.  Mohave Community College has policies dealing with campus safety and sexual harassment and assault.  Mohave Mental Health and Southwest Behavioral provide long-term therapy services for depression, anxiety, and PTSD.  Local hospitals have trained forensic examiners, social workers, and counselors available for immediate care after a sexual assault.  The Mohave County Health Department performs confidential testing for STDs/HIV.
Charles P. Nemeth (2012) defines rape as sexual intercourse with another person through the use of force, without consent, and with intent.  His guidelines for dealing with an attack include trying to dissuade the attacker from completing the act; pretending to have an STD or AIDS; acting insane; yelling; struggling and fighting back; using self-defense skills; using pepper spray or mace; avoiding resistance in order to survive (Nemeth, 2012).
The Governor’s Office for Children, Youth, and Families (2004) describes rape “as a crime of power and control . . . motivated by aggression and hatred, not sex.”  The state of Arizona has implemented a statewide plan to address the problem through standardized educational programs, increased availability of services to victims, and expanded tools for prosecutors and police to increase the number of convictions for sexual assault.  But most comprehensive services are concentrated in the Phoenix/Tucson metropolitan areas.  More needs to be done for less populated counties like Mohave County.


Centers for Disease Control, National Center for Injury Prevention and Control, Division of


Governor’s Office for Children, Youth, and Families, Division for Women. (2004). The state


plan on domestic & sexual violence: A guide for safety & injustice in arizona. Phoenix,